The surroundings of Talca, a town of 250,000 inhabitants, offers a surprising number of hikes, trekking tours and mountain climbing. By far the best known is the Condor Circular Hike. For shorter tours, the Altos del Lircay nature reserve and the private Tricahue nature reserve offer beautiful trails. At the entrance, but also already on the way to this park, the colourful Tricahue parrots are easily recognizable by their screeching. The route past the Tricahue Park, up to the Paso Pehuenche, is also one of the most beautiful routes in Chile. Perhaps the most beautiful point of this Andean crossing is the small hike to the rainbow waterfall. 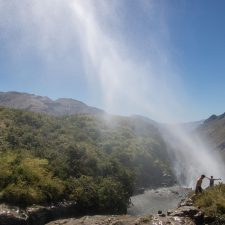 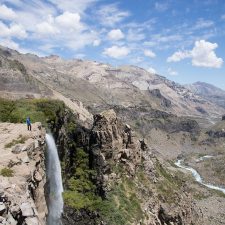 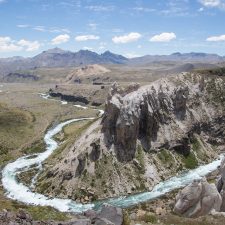 Instead of following the gravity of the rock face downhill, the strong thermals blow most of the water of the fall up into the sky almost every afternoon. On the shallow shore of the Laguna del Maule flamingos wade, snow covers the 3000 m high mountains and condors elegantly make their rounds over our heads.

The picture-perfect landscape does not break off and leads us along the Rio Colorado on the Argentine side. The turquoise river in autumn forms the northern border to Patagonia. On the way, gauchos drive their herds of goats very photogenic along the valley. In the settlement Las Loicas the passes are stamped, opposite there are huge sandwiches in the restaurant Mapicsa. Shortly before the adventure road Ruta 40, a road branches off to the left to the stalactite caves “Cueva de las Brujas”. The visit is worthwhile, but one has to book the visit in the place Malargüe at the tourist information or at one of the travel agencies. Without advance booking, nothing works. To the south, the road leads to Chos Malal and offers access to the highest mountain of Patagonia, the Cerro Domuyo. It can be climbed in 4-5 days, which is still a worthwhile adventure, far off the beaten tourist track. To the north the Ruta 40 goes up to the small pass Chihuida, shortly after there is a good coffee in the “Turcara” to the left of the road. Here, one can also do a small hike to the “Choro de la vieja”. 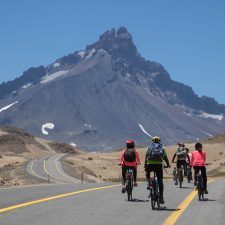 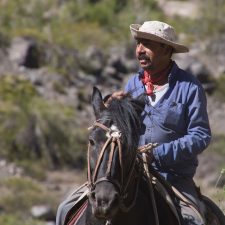 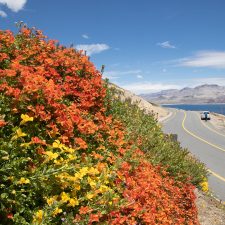 Following the pass downhill we pass to the right the excursion point Maqui Malal, with a small waterfall, a multitude of fossils in the rock and a simple restaurant, known for its goat roast. At the next big junction, a really bad corrugated iron track leads to Flamingo Lake Llancanelo. The shore of the lake recedes more and more, too much water is used here for agriculture. Nevertheless, the visit is worthwhile. During the breeding season 15000 flamingos nest here. We get the best view from the volcano Trapal which can be climbed on a short hike. Choiques are called here the ostrich birds and one sees them almost with guarantee. Also armadillos run from time to time across the road and even Guanacos can be observed without further ado in this area. South of it the area of the Payunia joins. With 800 volcanic cones in a very small space, it represents the highest volcanic density on earth. You can explore the area with your own car, but you have to hire a local guide from Malargüe. There are a few simple accommodations on the farms within the park, but most people visit Payunia on a long day trip from Malargüe. 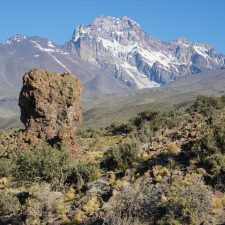 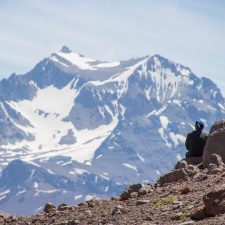 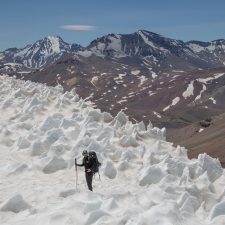 Malargüe itself is a nice town and offers an unexpectedly good tourist infrastructure. This is due to the Pierre Auger Observatory, which can be visited daily during the week, and the nearby Las Lenas ski resort. In the observatory, one should not expect the view through a huge telescope. Here, the data of energy-charged particles are measured that reveal the origin of the universe by tiny flashes of light in water tanks. The lectures in the modern planetarium are easier to understand for laymen, especially the tour with explanations about the function of different sundials is great. By bike or car you can visit the caves “Castillo de Pincheira” and mineral lovers will find fluorites along the railway tracks. The best steaks – bife chorizo – are served in the restaurant of the hotel Rio Grande and believe me, we can compare this, we have a lot of stuff eaten in the place. Worth a detour is also the trout pond with restaurant outside the city, but apart from trout there is no alternative. The road leaves the city of Marlargüe in northern direction past the top tourist information. It doesn’t take long now and we pass the turn-off to the ski area of Las Lenas. In winter there is perfect powder snow.

But in summer it’s not really worth driving there. There are a few dolines of gigantic size filled with water, like the Laguna Nina Encantada, and cute Viscachas sit on the rocks. But so far, one has neglected to invest into the summer tourism, there are hardly any signposted hikes and it is simply too far for a short side trip. The main road now makes a bend and leads exactly to the east. In Sosneado there is a gas station, here also the runway branches off into the valley “Valle de las Lagrimas” and to the mountain “Cerro Sosneado”. 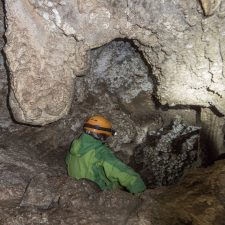 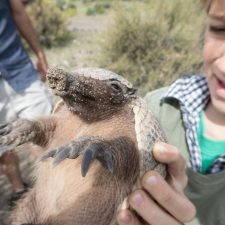 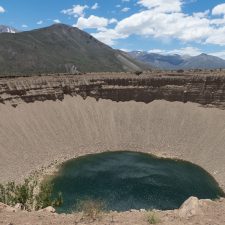 In the Valle de las Lagrimas, flight 571 crashed in 1972 at an altitude of just under 4000 m. The plane was in the middle of the valley. After 72 days 16 survivors could still be rescued. It became medially known however mainly by the sad circumstance to have nourished itself from the deceased. A three-day trekking leads high to the crash site. Less known but even more beautiful is the ascent to the Cerro Sosneado itself. The summit day, however, is not without its danger of falling rocks. Soon the small salt pan “Salar el Diamante” shines towards us from far away. This can be visited also simply on a stop. Shortly after a road branches off, this leads south into the gorge of the Rio Atuel. Passing the dam and the lake we drive along the narrow gorge on a good road up to San Rafael. On the way there are accommodations, camping possibilities, restaurants as well as the possibility to do a simple rafting tour. San Rafael itself can be imagined as a small Mendoza. Here, as in the big sister, there are also beautiful wineries in the vicinity. The winery “Algodon Wine Estate” is especially noble with a great accommodation and restaurant. But this time we nest in the Hotel Francia in the center of San Rafael, which can be recommended for 50 USD in doubles. 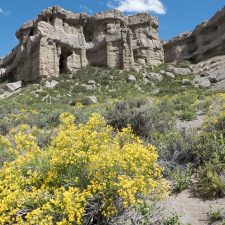 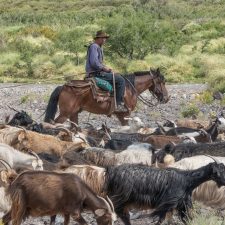 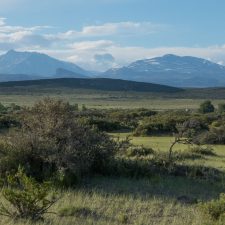 Only a few blocks away there are great restaurants, bars and juicy steaks, e.g. in La Maquina opposite the old railway station. The whole distance from Talca to San Rafael can be covered by public bus, but there is hardly any possibility to enjoy the beautiful spots on the way. Of course, the Andes crossing with the rental vehicle is ideal and nature lovers should also generously plan a few days, the route is really great. Of course, the organized tour from the Pacific coast to San Rafael on electric bikes is extraordinary, an absolute highlight for active people.