Traveling through Chile-Hikes on the island Robinson Crusoe

Far out in the Pacific, 674 km from the mainland, lies Isla Robinson Crusoe (48 square kilometres), which belongs to Chile. Together with the islands Santa Clara (2 km2) and Selkirk (50 km2) it forms the archipelago Juan Fernández. It owes its fame to a pirate dispute: In 1704 the Scottish sailor Alexander Selkirk had himself abandoned on the deserted island after violent clashes with the captain of the buccaneer on which he sailed. After 4 years and 4 months he was rescued and returned to Great Britain. But his story, imaginatively enriched by the writer Daniel Defoe, who turned Selkirk into the novel hero Robinson Crusoe, went around the world. In the west the volcanic island presents itself dry in various earth tones. In the east the Cerro Yunque rises, with 915 m the highest elevation of the island. Its slopes are deeply cut through gorges and show off with lush green. The flora is represented by 215 species, 130 of which can be found on this island alone. In the only place of the island, San Juan Bautista, about 500 people live from lobsters and fishing. Although tourism is growing, there are only about 2000 visitors a year, mainly due to the high airfare. As always, there are exact hiking descriptions to the individual tours, both on our tour portal and on our App Trekkingchile. The best travel time is in the same months as from Central Chile and Patagonia. From October, or better from November until the end of April at the latest, the hikes presented here can be done well. From time to time you can arrive by boat, but with the waves it might be more of a martyrdom. Flights are offered by several airlines. The difference lies less in the price than on the different flight days.

A good possibility to take the first steps on the island is the 3 hours long tour to Plazoleta El Yunque. The Plazoleta El Yunque is already inside the national park. From the picnic place one can go on a circular walk with interesting island vegetation. 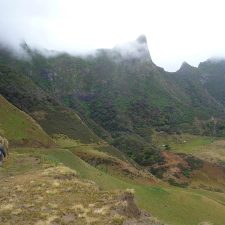 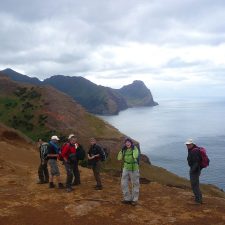 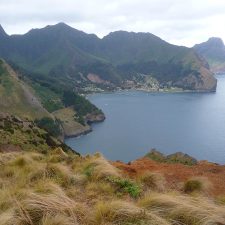 A narrow path signposted with Salsipuedes leads through eucalyptus, aromatic and pine forests. Above the tree line many Murtilla bushes cover the mountain slope. The viewpoint at over 400 m offers the best views of Juan Bautista and the Bahia Cumberland. The tour lasts only a few hours, but is worth it because of the view.

The Sendero de Chile leads actually on a distance of good 6000 km by whole Chile. But with the project also the islands have been considered and so Easter Island and Robinson Crusoe are not without their section. The about 7 hours long route starts at the airport and then meanders along the mountain slopes, past the Mirador Selkirk and downhill to Juan Bautista. One distance has to be covered by boat. 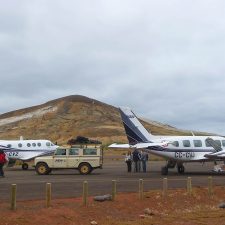 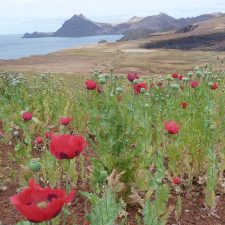 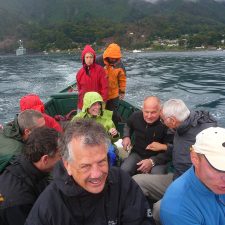 The 7-hour hike to Rebaje de la Piña starts with a daring landing manoeuvre. Since large boats cannot dock on the flat coasts, you have to row with nut shells yourself. If there are waves it looks strange, but the danger of getting wet is deep in your neck. Now the way leads always steeply uphill up to the view point Rebaje de la Piña. Over bizarre, intensively colored mountain slopes. We hike back to Bahia Cumberland.