Chile-Hiking and trekking in the Atacama desert

The Atacama Desert has the reputation of the driest desert in the world. That may be true, but one should not confuse the narrow strip of the real desert with the Andean region and its mountain foothills. There it  very often comes to precipitation. In the northernmost region of Chile, Putre – Parinacota, the volcanic giants are covered with glaciers. In the last 25 years we have not only climbed most of the mountain classics, but have also entered really remote areas and got to know fantastic nature. We don’t want to give you a Best of List, but here we present you some tours that are unique in their way. The starting point for numerous mountain tours in the far north is the small Aymara village of Putre. Putre can be reached by asphalt road via Arica. The access road continues to Lago Chungara and the Tambo Quemada Pass to Bolivia. Right after the border Bolivia’s highest mountain, the Cerro Sajama, rises. Putre is suitable for a slow altitude adjustment with its not very big but at least existing infrastructure like accommodations and restaurants. The village itself is located at 3500 m and beautiful hikes in the immediate surroundings lead us into even thinner air. The circular hike Pitacane is probably the most beautiful tour.

The 16 km long circular path leads up to the Cerro Pitacane, with 3534 m the highest point of the tour. On a 16 km route along deep gorges we also pass the rock paintings of Wilakahuranny. Especially beautiful are the views on the snow-covered mountains of the Nevados de Putre and the green terrace fields of the Altiplano farmers. 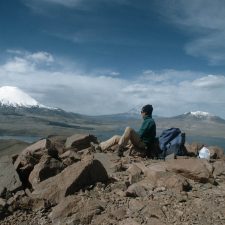 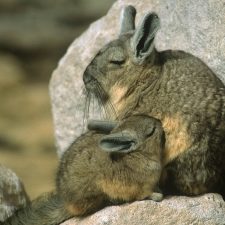 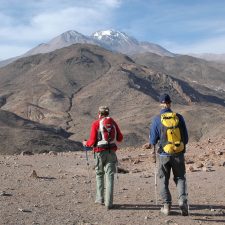 Just over the 5000 m border the ascent leads to the Cerro Milagro. The mountain is already visible from Putre. On the spot one cannot believe the intense, cheesy colours of the rock. The whole volcanic area shines in orange, red, yellow and brown tones. The best way to set off on the mountain is with a four-wheel drive vehicle. A short ascent to the summit shows us an incredible landscape with a view of several 6000m peaks. Now almost only downhill we hike to the thermal baths of Jurasi. In the simple hot springs it is possible to relax wonderfully after the tour. Who has desire extends the migration and descends up to Putre. Caution!! Along the stream the rock on the mountain slope can be hard frozen and have icy places. 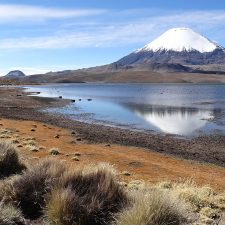 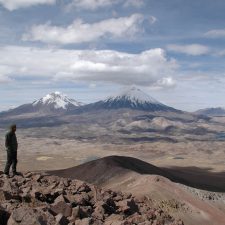 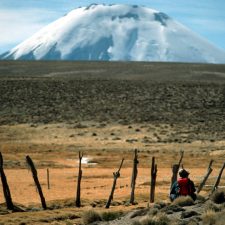 South of the large twin volcanoes Parinacota and Pomerape, another ice-armored 6000m high mountain rises, the Cerro Guallatiri. About 30 m below its 6063 m high summit is the volcanic crater. It hisses and smokes from the vent, biting fumes pierce the nose and the summit itself is often not reached depending on the wind direction. The view to the Quimsachata mountains and the azure blue Lago Chungara is one of the best in northern Chile. The ascent time is about 4-5 hours, assuming sufficient altitude adjustment. 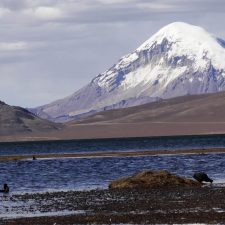 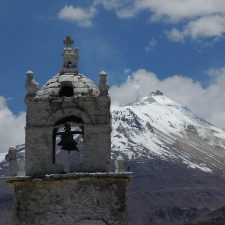 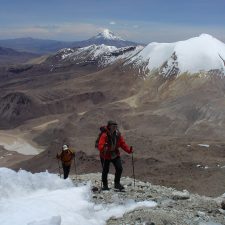 South of Iquique, the coastal cordillera plunges steeply into the Pacific Ocean. There remains a narrow, flat seam between the mountains and the coast, hardly any space for infrastructure. 70 km from the centre, a small island Patache extends into the sea. Hardly noticed it hides a variety of fauna – sea lions, penguins, boobies, various cormorants and other bird species can easily be observed on a short hike. 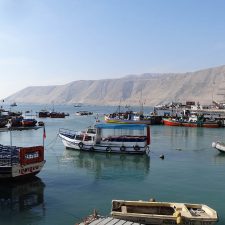 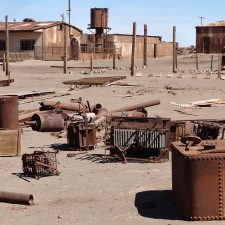 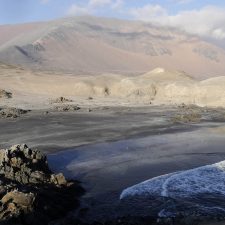 Much easier but no less impressive is the ascent to the 5165 m high volcano Irruputuncu at the Bolivian border. The journey can only be made by private transport or you can simply book a tour. The ingenious thing about this trekking – five thousand meter is the volcano crater. Tons of cheesz yellow sulphur lies around, everywhere it smokes and corrosive vapours burn in the nose.

For us tourists the small place San Pedro de Atacama represents the heart of the desert. But this is more due to the tourist offers that are constantly reinventing themselves here. The classics are still the geothermal field of El Tatio, the moon valley and the Death valley, the Andean lagoons of Miscanti and Meninques and the salt pan with the flamingo lake Chaxa. In recent years, sandboarding, astronomical tours and excursions to the salt lagoon Cejia have become very popular. The density of hostels, hotels, tour operators and restaurants has already exceeded the limits of what is reasonable. However, demand is still growing and is hardly regulated. That doesn’t mean not being able to do great tours here, quite the opposite. The hike through the San Pedro valley and back over the sand dune of Corniza is certainly one of the most scenically rewarding trails. Those who would like to climb a five thousand meter peak but do not have a lot of experience will also find what they are looking for. Where else can one reach the enormous height of 5604 m in one single day as at the Cerro Toco? 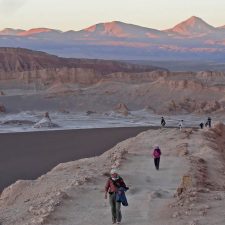 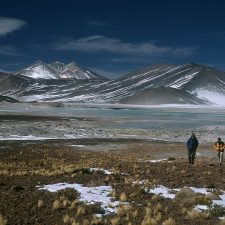 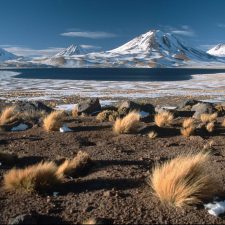 The Corniza Trail is considered to be the most beautiful hike starting from San Pedro. At the beginning it leads us along the valley of the Rio San Pedro past the ruins of Pukara de Quitor. Near the salt gorge “Garganta del Diablo”, a road leads west up to the tunnel. On the other side, the walk continues as a path. From now on the views are spectacular. Always along the upper edge of the gorge we descend over a huge sand dune into the Todesschlucht. From here we either walk on to San Pedro or arrange a transfer.

Well acclimatized, the Cerro Toco offers trekkers the opportunity to reach a height of 5604m. If there is snow or snow left, the path can be difficult, otherwise it is a great trekking summit. With the vehicle we already reach the 5000 m border. Who is on the way with the rented vehicle should inform himself well about the approach and the condition of the way. Alternatively, one simply books a tour in San Pedro.

Serious mountaineers at Ojos del Salado will find not only a big but also the biggest challenge. With 6885 m it is also the highest volcano on earth. Nevertheless, it is rarely climbed. But this is more due to the missing infrastructure which requires the ascent of an enormous logistical achievement. The approach must be carried out with all-wheel drive vehicles and the entire water must be carried along. In Chile it is not as easy to hire a carrier as in Peru or Bolivia. The Atacama is also hardly inhabited, you are largely on your own, which must be considered for emergencies.