It was not difficult to convince my family that Tierra del Fuego would be our next destination. All I needed was a single keyword and the Maldives, the most beautiful Brazilian beaches and even the Caribbean moved far behind in the popularity scale of the Family Council. A word that has become synonymous with cuteness, an animal that has cuddled up in the hearts of most people – the magic word was PINGUIN.

Tierra del Fuego also offers a variety of great hikes and attracts with the unique promise to be at the end of the world. Nothing like that. Starting from Chile we flew to Punta Arenas and indulged ourselves in this rough city in sunshine. Already the landing can be an experience. Years ago the wind was so strong that every passenger was accompanied by the staff left and right supported by the airplane over the runway to the terminal. At the moment, pumas are sighted on the runway over and over again. That would be a thing, unfortunately we had no luck with it but we should be able to observe more than enough animals on our journey.

We settled in the small Hostal Buena Estancia, a little outside the center. Nearby is my favourite restaurant, which once again didn’t disappoint us. In La Cuisine, the French cuisine is cleverly combined with that from Patagonia. Guys, this is really a must even if it is not a bargain. The next day, we went through all the sights that we found in the travel know how. For the kids the open-air museum Nao Victoria with a multitude of historical ships, perfectly reconstructed.

A little morbid however the cemetery with grave inscriptions of people from all over the world. It’s a mistake to have to pay admission. Of all the excursions around Punta Arenas one should not miss the boat trip to the Isla Magdalena.

Even if one should undertake the king penguins at Porvenir or even the boat tour from Ushuaia, the island with its thousands of penguins is really worthwhile. It lies in the Strait of Magellan and is known for its strong winds. So it often happens that the boats can not leave. If they should dare it nevertheless, this can hit sensitive people on the stomach. Travel tablets should definitely be put in your hand luggage. Depending on the tour offer the island Marta is visited first. Here sea lions are roaring. The smell of the impressive animals spices are smelled in the air already from afar. On Magdalena you are not only allowed to go ashore, but also on a circular hike up to the lighthouse. Right next to the path, curious Magellan penguins gape out of their caves. Ungraded, they cross our paths and fill the air with a donkey-like scream. On the hillsides they compete and waddle up the hillside. The number of animals alone is an incredible experience and the closeness to the animals makes the heart of every animal lover beat faster.

There are two regular ferries to Tierra del Fuego. For the outward journey we choose the longer route of about 2.5 hours, which heads from Punta Arenas to the opposite Porvenir. When there is no wind there is only one – eyes open. Dolphins as well as whales are to be seen very frequently. It is best to look out for the blow with binoculars, the explosive exhalation of the mammals. Porvenir itself is a nice little town with accommodation, restaurants and supermarkets. Now it is a good 1.5 hours on a dusty road to Onaisin. The king penguins are neither numerous here, nor can one get close to them, furthermore, the entrance is not exactly without. But for us it is the first time to see this quite big penguin species with its distinctive yellow plumage and it is worth it to stay in the cold wind. The next accommodations are at Lago Blanco or Lago Deseado. A long ride on a dusty road. At Lago Blanco there are a number of accommodations and lodges. The lake is known for its abundance of fish and fishermen like to pay a lot as long as the bite is good. The prices are therefore not always justified. We decided to go straight to Lago Deseado. The road ends here and continues only for 4 x 4 vehicles feasible up to Lago Fagnano at the Argentine border. It won’t be long before lodges are built here as well. With a local guide we made two smaller hikes, the Beavertrail and the ascent to the Salto Deseado waterfall. Beaver buildings can be seen everywhere. Tree trunks lie crosswise on top of each other like Mikado sticks and the remains protrude like sharpened pencils gnawed from the ground. Beavers were introduced here long ago and today are a plague that can hardly be controlled. After a three day stay we continued on a long day over the Paso Río Bellavista to the Argentine side of Tierra del Fuego. The river crossing at the border is a bit uncomfortable. The vehicle that got stuck in the sandy ground in front of us did not contribute much to our reassurance. The owners were already waiting the second day for a tractor to pull them out.  Eighty kilometres away at the coast is the next big place Río Grande. But we drove in one through to Ushuaia. 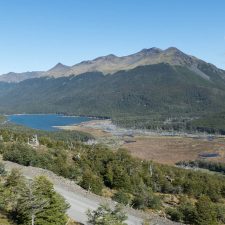 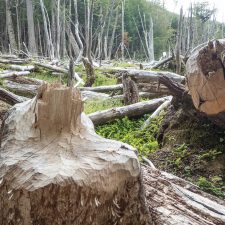 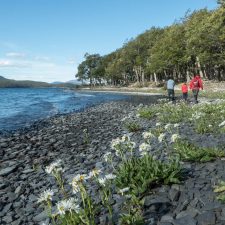 The word alone awakens longing U-S-S-H-U-A-I-A, we would like to go there again. Admittedly, it is already very touristy, cruise ships from all over the world are in the harbour and accordingly the excursion destinations and restaurants are well visited. But apart from the great location and the good hiking possibilities in the nearby national park Tierra del Fuego, the city also has a lot to offer. Of the three museums, the Presidio should not be missed. It does not only show the history of the prison but also offers a fascinating exhibition about the seafaring and the fauna of the island. In the shop you can buy a variety of maps. The next days we walked to the enchanting Laguna Esmeralda, which hides turquoise dressed at the foot of the Cerro Bonetes. Another tour leads directly from the city up to the glacier Martial with a great view to the Beagle Channel and Ushuaia. Our last hike in the National Park Tierra del Fuego leads through Lenga Forest to Lapataia Bay. From the port of Arias there is an extension with a good opportunity to observe the flightless steamboat ducks. But the crowning finale was still waiting for us, the trip to Tierra del Fuego would have been worth it. 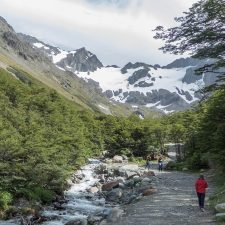 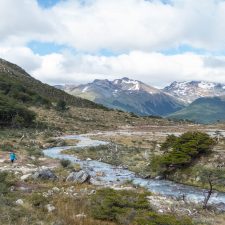 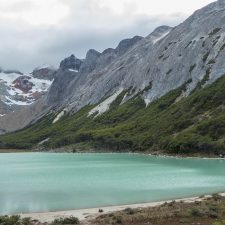 On the Beagle Canal the boat tour leads to the lighthouse “Faro Les Eclaireurs”, stops at the historically young but nevertheless interesting Estancia Haberton and above all at the Isla Martillo. The island is something like a Mecca for penguin crazy people. Not only Magellan penguins and some king penguins live here, but also donkey penguins. The tour is not cheap, the whole thing is of course strongly marketed for tourism but the spot is fragrant and the positive memories predominate by far. The next day it was time to go home. A long drive of about 12 hours took us via Punta Delgada, with a short ferry trip, back to Punta Arenas.