The Southern Pacific is certainly known to every diving enthusiast and wedding couple, but hardly any hiker comes up with the idea of going on tours there. Especially Tahiti and Moorea are unexpectedly exciting destinations. Their mountain world with over 2000 m high summits, rugged slopes densely covered with fragrant vegetation and above all the combination with the most beautiful beaches in the world and its aquarium-like waters, make this holiday destination also a hiking destination.

On Tahiti it rains a full 12 metres per year, of which about 9 metres rain in the months from December to February. Now you may know when you don’t want to travel. The driest and coldest months are between May and August. From September it gets warmer again but also rainer. This time we are here in the middle of August, I am just sitting on the terrace in Papeete and it rained today just as it did during our last visit in October. To get to know Tahiti for the first time, take a round trip along the coastal road. Tahiti consists of two parts, the larger Tahiti Nui and the smaller Tahiti Iti. A 160 km long asphalted road, mostly with bicycle lanes, leads once around the main island. Neither the sightseeings along the road nor the beaches are real attractions, it is rather the landscape with the many coconut trees and the rugged mountains inland. 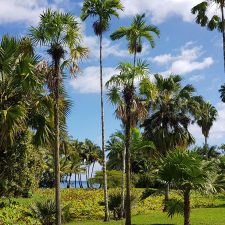 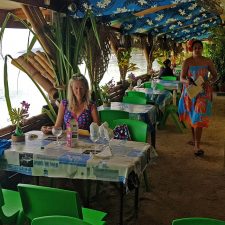 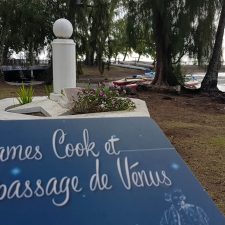 Island crossing of Tahiti with the 4×4

If you don’t feel like hiking, you can still explore the interior of Tahiti. Several agencies offer jeep safaris for about 70 USD per person. The route always remains the same, but the price varies slightly. On a distance of approximately 50 km, the bumpy runway crosses Tahiti Nui. It always leads along the beautiful valleys of Papenoo and Valhiria, but is definitely not suitable for people with vertigo or back problems. From the surrounding rugged mountain slopes, densely covered with tropical vegetation, a multitude of waterfalls plunge down. In the simple restaurant Relais de la Maroto there are local dishes with a great view as a side dish. Now it’s another steep climb, 200 m through a tunnel and further down the Valée Valhiria. Already from far above we see the lake Lac Valhiria. The view during the whole trip is certainly brilliant when the weather is good, with us there were mostly clouds and rain. In the late afternoon we reach again the coastal road at Mataia, not far away from the botanical garden. Hike in the Fautaua valley

Tahiti is not a bathing and beach paradise, apart from the international airport it is above all the interior with its rugged mountain peaks and the tropical vegetation which makes the hearts of hikers beat faster. Near Papeete several day trips lead through jungle-like forests to waterfalls and the over 2000 m high volcanic mountains. From the Fautaua valley the drinking water for the capital is promoted. One hike leads to the bridge and then steep and slippery up to Cascade.

On this hike a picture book landscape awaits you below the Aroai mountains. Steep, rugged walls, densely covered with vegetation fall almost vertically downhill. The mountain peaks often hide in the clouds. When there is no wind, you can hear the surf on the reef up to the cottage. When it rains, however, the path turns into an extremely slippery and dangerous tour. The hike should therefore only be undertaken on really dry ground and only by hikers who are free from vertigo. 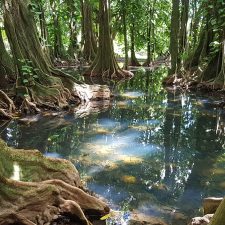 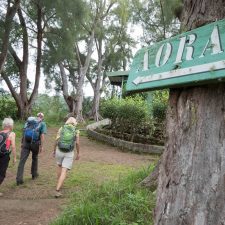 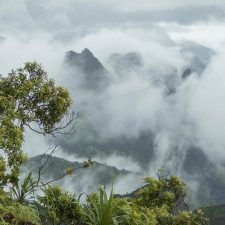 On the Ancient Trail there are several ruins, the so-called Maraes. The scenic highlight is the fantastic view from the 3 Pine Lookout to Cooks Bay. The way is quite easy and also good to walk on wet ground. A small stream has to be crossed, but on slippery rock. Perhaps the most beautiful hike on the island.

The most famous hike in Moorea with views of both sides of the coast. Moorea is considered to be the island of hiking, rugged mountains up to the highest peaks covered with vegetation rise out of the turquoise, bright sea. The dry season from March to the end of November is considered the best time to travel, but it can still rain during these months and the paths turn into slippery and muddy paths. The trail starts at the viewpoint “Belvedere” with a magnificent view over Cook Bay and Opunuhu.

Not far from the ferry pier, this short hike begins up to the lookout point. Short but steep with great views of Cooks Bay and the omnipresent Mt Rotoi. The way is hard to walk on wet ground, especially on the way back you have to be careful. The lower part is beautiful due to the small gardens with a lot of tropical fruits. 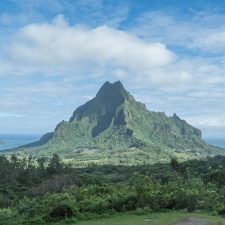 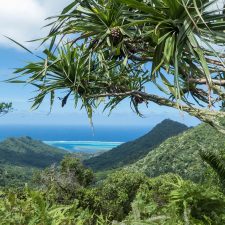 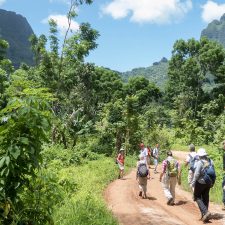 Moorea round trip by bicycle

You cycle through coconut plantations and dreamlike mountain scenery. It is difficult to rent halfway usable bicycles but the round trip over the island is breathtakingly beautiful and gives a good insight into the typical country life of Polynesia. Especially on weekends you can hear music everywhere, the people meet on the beach, from the churches you can hear the ukalele playing and in good weather the beautiful  glory of the island shows from all sides. The 9 km long and 5 km wide island is the rest of a long extinct volcano. Only parts of the crater rim protrude from the turquoise lagoon. The reef rim circles the island and forms a picture book atoll. In 2006 we snorkeled on Bora Bora for the last time, unfortunately the abundance of fish has also visibly decreased for us amateurs. The prices remained the same, which is not so good. Even shopping in the supermarket and cooking the food yourself shrinks the purse faster than you can refill it. We love to test, not only restaurants, but also accommodations. On Bora Bora we spent the night at three different places. The Rohotu Fare Lodge in Pofai Bay, south of Vaitape, deserves a special mention. The owner is from Israel and a true artist, the accommodation is accordingly furnished and consists of only three cabins. Each is equipped with a kitchen, these are outdoors, only the bedroom has an air condition. Equally impressive is the vegetation in which the complex is located, almost like a botanical garden. All excursions can be organized from the hotel and even cheaper than directly at the agency. But there is neither food nor breakfast, one has to prepare everything for oneself or go to a restaurant. 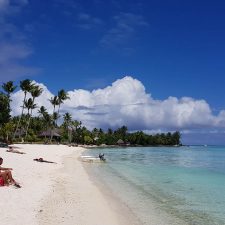 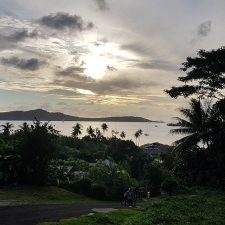 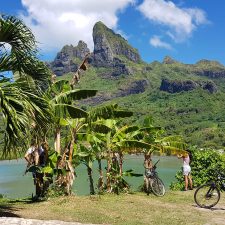 By bike on Bora Bora

I always like to take the bike and go for it. Some accommodations offer simple models for free, otherwise there are several rental stations. You can hardly get lost on a single ring road of about 30 km. On the way, the friendliness of the inhabitants is totally pleasing, everyone greets me and drivers are careful not to get too close to me. On the east side of the island there is hardly any traffic, but there are two short climbs waiting for us. In Sofitel I enjoy a good coffee, diagonally opposite there is also delicious ice cream. The most beautiful beach section of the Matira Beaches is right at the Matira Snack, for me the best place of the island. The water is almost lukewarm, has an almost unnatural blue colour and is crystal clear, just as one imagines Bora Bora. A bit further a coconut palm avenue decorates the street and at Bloody Mary´s, tropical drinks are waiting and not only for the Hollywood stars who like to stop here. Another hit are the snorkeling tours on Bora Bora. There are many agencies on site, we have been on the road with the local agency Lagoonarium. The half-day snorkeling tour costs 80 USD, the whole day including the barbecue costs 120 USD, children pay half. You will be picked up from the hotel and taken to the agency’s boat dock. First we go to a tidal canal (“Hoa”) east of the island and snorkel with stingrays and blacktip reef sharks, which is really fantastic. We continue to the coral garden at the two islands (Motus) of Sofitel. This is one of the best snorkelling areas in the lagoon. By boat we circumnavigate Bora Bora and finally moor in the Lagoonarium. Here you can snorkel with lemon sharks and rays in a tank separated from nets. It is partly highly praised on the Internet, but I personally find it neither great to snorkel with captured sharks nor is the beach beautiful. 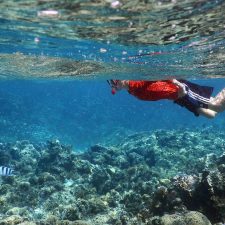 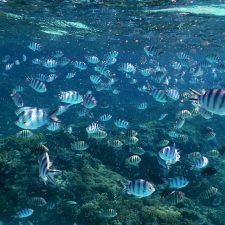 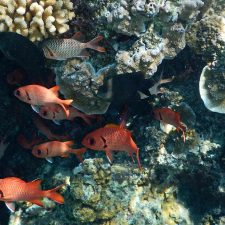