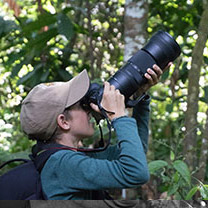 The golden headed tamarin – The last of its kind

It all started when we wanted to travel from Recife (Northeast Brazil) to El Salvador, but then something happened in between, really the worst of all the bad luck that could have happened. In all of Brazil the sun reigned with more than thirty degrees and it rained only on our heads during the whole trip! It’s true… it only rained right on our route to Salvador. After the first week of rain I wanted to go to either Rio de Janeiro or Belo Horizonte … but how could I explain it to my parents?

I wanted to go to Rio, because there live some rare monkeys called golden lion tamarins; and to Belo Horizonte, because there inhabit the mane wolves and can be seen freely in the National Park. Then I found something exciting on the internet. In Ilheus you can still see the golden-headed tamarin monkeys, a place that was only 1000 km away. If we do something like that, the rain will not matter anymore. I’m not going to reveal my tricks, but Mom and Dad were softened.

The trip was already exhausting and took five hours to the cocoa plantation of Fazenda Almada. Along the way we stopped all the time to observe animals, such as the exotic maned sloth or other species of monkeys, but it could not be so easy. We passed by several times and the trip seemed not to want to finish. After a lot of searching we finally arrived at Fazenda. The house was huge, with many rooms. All for us! The construction was ancestrally old; the furniture of heavy tropical wood and in front of the railing began the jungle.

Here we go after the last of its kind!

The next day we left very early. Bila, our guide, is a biologist. I used a directional antenna under my arm and we ventured into the vegetation. After three hours of searching we still had not seen even the tail of a monkey. We could have such bad luck and travel 1000 km for nothing. Our mood was somewhat tense, while I wondered why we had a directional antenna when I suddenly heard it. It started like a murmur and slowly followed by a tick, tick, tick. We had found them! Honestly that was an incredible and very beautiful moment for me. Entire families jumped on our heads and some brave ones came a few meters from us. For two full hours we enjoyed the show and then walked with our rubber boots back to Facenda. For these monkey seekers, the day went by very fast.

The next day, however, it was not so exciting anymore. We went by canoe ready for the museum towards a lake. It was actually a nice place to fish. We even caught a 5 cm one. Amazing! Unfortunately with this we ended our stay at Fazenda Almada and now I am sitting at home, thinking about those fantastic days while I write this blog entry.