Once again, as in previous years, I was waiting for Daniel at the Santiago airport in Chile. At least once a year we are here in South America to search for new white spots on the map in order to fill them with our own colors. This time it is about mountaineering in Argentina. The time is now and the KL 701 lands punctually at 11:05 from Amsterdam. A short time later the Pope landed.

Preparations and how to get there

We crossed to Argentina through the Paso Los Libertadores in just 5 hours; of which 2 of them were spent waiting at the customs office that was collapsed. We reached the Los Penitentes Ski Center. You can have a general view of the place using the Adventure Map Chile Central and Argentina and as a navigator in the car MapsMe works really well. Thousands of Argentine believers cross the border to see the Pope during his visit to Santiago de Chile. After all it is about their Pope.

The very same day, 8 years ago, we checked in the same hotel: Hotel Ayelen. At that time we came from the Cordón del Plata and we continued towards the Aconcagua. The rooms remain exactly the same and the food has improved a lot lately, taking into account in which corner of the planet we are.

Today we meet with the Gauchos who will move our backpacks to the camp located at 3200 m. The evening is very Argentine style, without tango, but with a juicy Bife Chorizo ​​and necessarily accompanied by a bottle of Malbec. Or were they two?

Just a couple of kilometers away from the Hotel, the road opens to the south with a view of the Vargas Valley. It is the view towards our goal, the corpulent mountain chain persuades through a great landscape. At the foot of the 4000les, eroded rocks line up side by side as if it were a forest of firs in the alpine forests. Our backpacks disappear from our sight because of the dust raised by the mules on the way to the camp. It is our second day of arriving in South America and we are already walking towards silence. There is no traffic or any human being. You hear the mental buzzing and the strong breathing that tells us that we are finally on our way. The valley narrows and a black and eagle has chosen our same route and accompanies us up valley. It’s only 3 hours to reach the Grajales refuge. The optical effect does not provide pleasure, but in bad weather anyone can imagine themselves perfectly happy between walled walls and indoors during a storm. We, on the other hand, are glad to be able to go down again to build our tent, unroll the mats and stretch the sleeping bags. The tent has a very particular and unmistakable smell just like home. 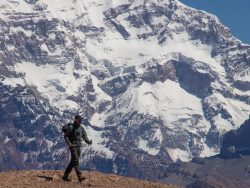 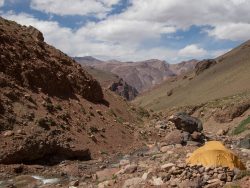 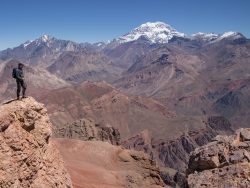 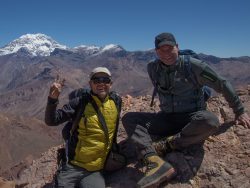 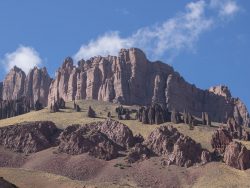 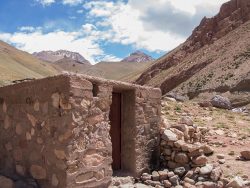 Cerro Penitentes, the viewpoint of the mountain

The technical route, but not problematic towards Cerro Penitentes, winds up the steep slope. Just after an hour’s walk you can appreciate the highest hill in South America, the Aconcagua. Step by step its head grows above sea level, dignifyingly honoring its height of 6962 m. At the summit, an Argentine flag flutters patriotically. At our feet the Valley of Mendoza can be seen, while we are filled with the feeling of getting into nature. There is no prettier view of the Aconcagua. The magnificent southern wall with its armored flank of ice impresses more from here than from the Plaza Francia camp, which saved us a good amount of money for the trekking permit and we walked practically alone.

A couple of years ago we “discovered” the Barreal, a small place. The site is located between the eroded and colorful mountains to the west and the peaks of the five and six thousand that offer excursions for several weeks: vineyards, observatories and excellent accommodations complete the picture. For the first time severe storms condemn us to sigh and content ourselves with wine and steak. The sun breaks are filled with hikes through the national park, we did the Leoncito and an excursion in Windcar. A Windcar is driven like a car, but it is driven by sail. The best winds come only in the early afternoon. We passed by a good 50 km / h on the clay surface, while around the dark storm clouds and the roar of the blizzard in the mountains created an image for the gods. If one day you visit the Barreal please do not forget these lines and do it. Do not pass by.

I have been living in Chile since 1993 and I am a hiker by profession. I also spend my free time doing tours, mostly in South America. When I saw Ansilta’s Cord for the first time during an autumn, several years ago, I sent a photo to my friend Daniel next to the words: We have to go.

Now we are here, well acclimated and it will finally happen: we will raise the Ansilta 4.

The preparations and the first disappointments began months ago. The disadvantage of climbing little known hills is the lack of information on the route to the Ansilta 4. We did not even find a description of how to approach and we only had information that there are several trails to the 7 different summits of the Sierra Ansilta. The hills don’t even have names; they are only numbered. Being our first time we decided on an easier goal: summit number four. How the hell we get there! In the first part we joined a group of Argentines who had the same goal as us. With an all-terrain we did not have any problems on the bad roads and in 3 hours we reached Morillos, where two rocks stand out at 2850 m and the rest is quite flat. The tracks go south, Morro Chato. Here there are caves with petroglyphs that were made 6000 years ago by the natives of the same name: the Ansilta people. In the quarries in front of the caves are arrowheads and stone tools that were used to draw them. Here we can quietly notice that Argentines do not have any mercy to be discovered, a fine in money would be the lesser evil. Just leave that on the ground. We are also here to dedicate ourselves to the hills, therefore we continue climbing to camp 1. The backpack is designed for 7 days, but weighs less than feared, which is mainly because we carry dehydrated food and the rest and the tent it is brought by a Gaucho to camp 2. It is 3.5 kg less for the camp VE25 of the company Northface.

From the camp we have a direct view towards Ansilta 3, whose southern slope is snowed. Our goal shows its little head. Without GPS data or directions from the locals it is almost impossible to find the place. There are hardly any roads and most of them end up in the classic landscape of the puna with woody shrubs and thorny grasses. The Guanacos graze and in the distance the first condors fly in circles over our heads. 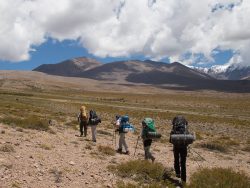 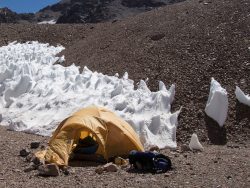 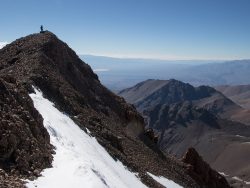 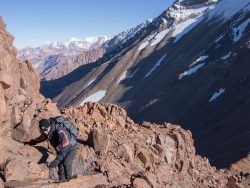 Our Argentine friends did not take the time to acclimate themselves in the terrain before the mountains and that began to be noticed every minute. At this rate Daniel would lose his return flight, so our paths separated. We left camp 2 to the right and continue immediately up to camp 3 located at 4000 m. During the afternoon we found water that gushed like streams of the penitents. A real luxury camp. The next day the trip to the summit, as to find us in the middle of summer, has been free of snow, so we started walking only at 05:30 AM. Just an hour later the first rays of the sun appear and I give free rein to my Canon 760 D. At 48000 m the backs of the Ansilta 3 and 4 join. The summits are joined by the northern edge of hauling and rocks that make us sweat. The view from the summit located at 5130 m is simply to take off the sleep and much more. Summits are in this place like sand on the beach, but for now we are going to return in a 12-hour day to camp 1. In Barreal the hotel and good food awaits us. When the donkey smells the stable, it does not stop.