One of the largest paradises of the animal kingdom of Planet Earth is located in the Pacific Ocean. The thirteen Galápagos Islands are located 1000 km away to the west of the Ecuadorian continent and were named natural heritage of humanity by UNESCO because its flora and fauna are unique and unrepeatable. The islands are protected almost entirely and are a natural reserve. Five of them are inhabited and the airport is located on the island of Baltra. Flights to the Galapagos Islands depart from Quito and Guayaquil. The offer of tourist packages is very varied and can be taken in the place or before leaving from Europe. We decided to book with a German company in order not to have to pay for domestic flights and excursions separately. The truth is that we are very satisfied.

It is the first time we visit the capital of Ecuador and it takes time to acclimatize to the South American rhythm. Quito has almost 2 million inhabitants and is located at 2850 m high inserted in a winding terrain that has as its main hill the Pichincha hill with a height of 4794 m. Most of the restaurants and hotels are located in the modern sector of the city such as the Mariscal de Sucre neighborhood. The colonial buildings on the other hand can be seen in the historical center and to cross it we take a tour of the city. Like most of the city tours in South America we started in the main square, La Plaza Grande. It is recommended to visit the government palace, where the guards wear their historical uniforms. We walk up Garcia Moreno Street to visit the Church of the Company, perhaps the most beautiful in the city. One block from here you can see the Plaza San Francisco and the monastery of the same name. The visit is justified by itself, since the interior patio is very beautiful. We continue along the Rocafuerte avenue until Juan de Dios Morales where the pedestrian walkway La Ronda begins. Not only the cafes and the restaurants invite visitors to visit, but the artisan stands also attract attention. From the Basilica of the National Vote and of course also from El Panecillo Viewpoint it is possible to appreciate the most beautiful views of the city. Up in the Panecillo we find the statue of the Virgin Mary carved in aluminum with 45 m of height and a little below a restaurant with garden and a beautiful view towards the city. 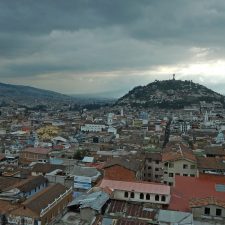 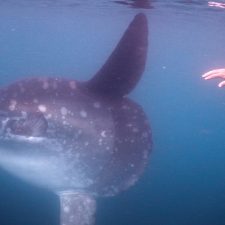 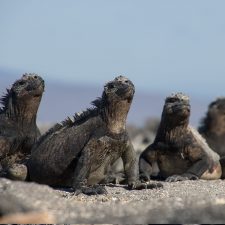 Some data for restaurants in Quito.

Los Geranios is located in the La Ronda neighborhood and 20 minutes walk from the main square. Fine and very clean. A little less sophisticated is Vista Hermosa, just around the corner from the hotel and the elevator is taken to the third floor. The place is simple, but the view of the city is fantastic. In the Cerro Panecillo is the Pim’s right at the foot of the statue of the Virgin. The place is great with a great view towards the city. The Taxi costs around 3 USD from the center.

The flight to Guayaquil lasts half an hour and then takes another one hour and a half to Baltra. Here you pay the entrance to the National Park which costs 100 USD and you pass the luggage by rays for your review. Then continue by bus to the port. The airport is on a small island of sparse vegetation which is composed mainly of poppy trees. We cross to Santa Cruz in a short trip by ferry and continue 40 km by bus to the south side of the island. At the beginning you can see dry forests and Palo Santo trees. When we gain altitude we enter a thick and green vegetation. In Puerto Ayora we went straight to the port and got on a support boat and sailed towards Corral II. In the port we observe sharks, sea turtles, striped rays, sea lions, pelicans and frigates. At dusk we visited the Charles Darwin Center. In this place giant tortoises are bred and rehabilitated. At this moment there are about 40,000 spread over the different islands. An average of 200,000 tourists visit Galápagos every year. From the center of Darwin about 15 min. on foot we cross the jetty. On the way there are a lot of businesses, craft stalls, restaurants and accommodation alternatives. During the night we rested to begin our tour of the islands in Floreana.

Floreana is a must for those who visit Galapagos. The sand is bright green because of the olivine crystals According to the tradition dating from 1763, tourists leave their postcards and carry the one someone else wrote. A short walk leads us to Cormoranes beach, where sea turtles breed from December. 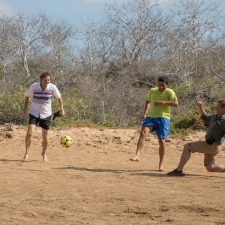 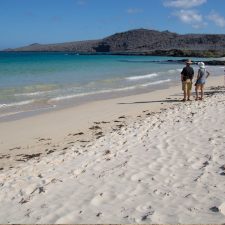 The small island resembles the lunar landscape. A large number of parasitic cones (cones formed of scoria) give shape to the crater. On the reddish stones glisten the endemic shrubs of tequilia. To climb the Mirador are 376 steps and from here you have a view towards the two bays in the shape of a half moon with its rock edges.

Fernandina is one of the central points of attraction. The island consists of a large volcanic shield. In addition to the impressive lava structures, the Punta Espinosa circuit is interesting, where marine iguanas are observed in numerous groups.

Isabela is the largest island in the Galapagos and occupies 50% of the surface. The five main volcanoes have collapsed as a result of the many eruptions. In Puerto Villamil, located to the south, they live near 2000 inhabitants. Nowadays it is possible to find excursions and accommodation. From here, daily, fast boats depart towards Puerto Ayora (Santa Cruz).

The Island of Santiago is the fourth largest of the archipelago. The most important attractions are Sullivan Bay in the east and Puerto Egas in the southern part of James Bay. Here, salt was formerly extracted. With a bit of luck during the short walk, you will see the only bird of prey endemic to the islands: the Galapagos.