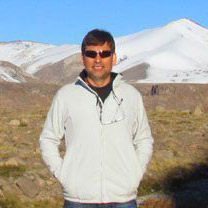 The small country of the Himalayas is known for its happiness capital nationwide. Well-being is not based on economic growth, but is defined by the mental health of its inhabitants. Bhutan has 700,000 inhabitants, but in writing 1.2 million have been counted, which is a small trick of the UN for the country to be recognized as an independent state. There are 2000 travel agencies with 4000 tourism guides that saturate the market for only 100,000 tourists a year. When entering the country it is necessary to carry out the procedure for the VISA of exit and just then the adventure towards the legendary trekking of the man of the snows begins. This not only belongs to the most beautiful routes in the world, but also to the most difficult, because long stretches are made by steps over 5000 m in height and walk on average over 4000 m, which is very demanding for hikers. We are walkers who have stayed young and have traveled different paths throughout the world and all year long, so it can not be so difficult: We fooled ourselves!

How to get to Bhutan:

You get to Bhutan through Nepal. From the Tribhuvan airport in Katmandu, it takes an hour to the Paro airport in Bhutan. The view from the plane seems like the images from the spacial station ISS. From here you have a unique view of Mount Everest, mount Makalu and above everything else, the mountain chain Kangchenjunga. The panoramic to the world of the eight thounsand is fantastic.  Paro is the only airport in Bhutan. We change money it’s name is easy to pronounce: Ngultrun.

The first days are a mix of tourism and short treks, like going to the Tigernest. The monastery is embedded in the naked rock an seems like a swallow’s nest. In all the trip the Tibetan flags are our companions in the way and are mostly tied to trees or rocks. Five sequential colours represent the elements: blue, the sky; white, the clouds; red, the fire; green, the water; and yellow, for the earth. The green colour was the first cause of our problems: water and just water, everywhere. It poured non-stop during the first days. The rivers grew and the yellow element turned into sticky mud. The slopes went down and rocks blocked the streets. This way, our arrival in 4×4 was the first stage of the trekking. Our bones were beaten through a mud and haul road buried to the knees for hours. We went down the slope sliding on our backs and thus we lost two days of road that we had to compensate during the rest of the circuit. The worst had already passed and we were finally able to start walking! 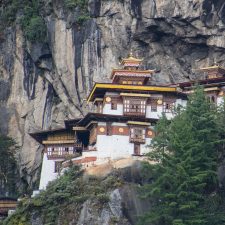 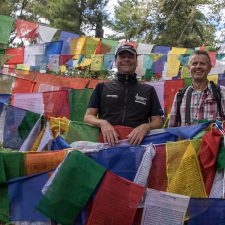 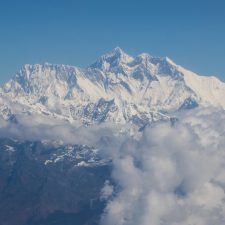 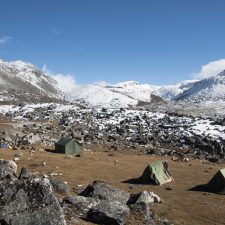 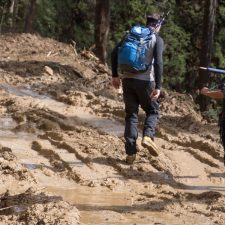 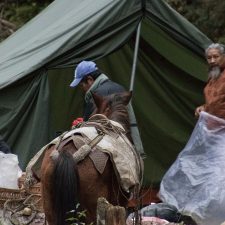 This tour is famous for being the most difficult trekking in the whole world. The ones who doesn’t know it will remain in doubt and those who do know, understand why. Just half of the trekkers reach the goal. The requirements are demanding and the weather conditions, uncertain.  In short, sometimes you almost forget the true meaning of the excursion: an incredible landscape and the people who are so affectionate, whose traditions are everyday life. There are hardly other walkers on the path, the camps are solitary and the portezuelos reach vertiginous heights. Compared to Nepal, there are very few campsites here, and there are no lodges or noodle soup on the side of the road.

Our key man was a guide called Thinley and the second best man was our cook, Sonam. The food was delicious, all the time. Then comes the pony sheperds. Nothing wrong to say about the animals, but about their owners.  Of course, you can’t elude all the effort and each trekker has to book the whole package in an Agency. The 50% of the cost is taxes, and that’s why the Snowman Trek is not just the most difficult of the world, and the most expensive too.

After dodging all the history of reservations, visas and permits, we finally booked the entire travel package with a German representative and we were very satisfied with the service. Everything worked perfectly.

It happened that the king of this happy people wanted to cheer up his people with his visit. There are no streets there, so his highness rode in the direction of Laya. By chance we were going through the same route and we happily thought that we would have the luck to meet his majesty, but he happened to be as buried as we were in the neighborhood. His ponies most likely gave their lives and … What did he do? He confiscated all the ponies he found on the way. No fools, we quickly hid our little animals in the forest, but soldiers who are not stupid found half of them anyway. That’s how we lost a day in getting other ponies. At sunset we reached the military camp and of course everything could be even worse. The gas balloon exploded and the kitchen tent vanished amid smoke and ashes; As is logical, a large part of the foodstuffs also burned.

I read once, before the expedition, that in this place they eat their ponies when things get difficult.  I never knew, but with our cook Sonam we managed it perfectly well. Perhaps it was the frequent visits that honored us during the night. Our mysterious companions suddenly rushed into the dust over the garbage bag. A Lama, visited our tent one day. They are the highest bearers of Buddhist beliefs. As it rained and the older man traveled on foot, he carried a large piece of plastic like a poncho. We gave him a roof and food and in a sign of his gratitude not only he blessed us, but ordered the five elements that the trip would go well. That’s how it was and it turned out to be.

The first night we slept over 4000m was in Rodophu. It was still raining. Here we found other groups during the rest of the excursion. The spent 8000 Euros for their trip. I asked them how did they feel about the spending such amount of money. They answered there was no problem, because they were citizens of the EU and everything was billed as a business travel. A small contribution from EU citizens.  It didn’t help them much, since in a small pass they got stuck in the snow and had to return. 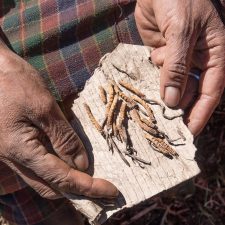 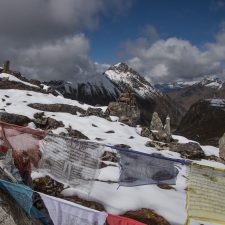 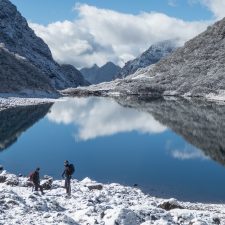 In Tenchey at 4180 m we found a couple of very simple houses. A group of women greeted us kindly, the usual in all the trek. In general, there’s few people and you even feel happy to when you have the chance to see them. Buthan is not as Nepal, where each couple of kilometres you find small restaurants and places to stay and rest. One of the women showed us her treasure underneath her skirt. It’s not what you’re thinking! Under her clothes she had a small bag with some long dried brown caterpillars, inside: Tibetan caterpillar fungus. They harvest them and smuggle them to China. I’m really not sure if it’s a prejudice, but you always hear that the Chinese eat everything. In any case they eat dried Tibetan caterpillar mushrooms. I also do not know if it’s true, but they consume it instead of taking viagra. Of course these fungi are grown and the woman with the bag under her skirt was delighted about it. The Chinese and the caterpillar mushrooms made her very happy.The kilo is sold in astronomical figures and for this reason the Tibetan mushroom is known as the Gold of the Himalayas.

Our highest overnight point reached 5019 m at the Jichu Drama Camp and is located halfway from Loju La Pass at 5114 m. We were all a little undone and our cook was suffering altitude sickness, for sure. The trek going up to Paso Tampe is very steep and reaches 4635 m. The ponies varely made it. The slope is so strong that sometimes the animals tended to slip backwards. There were pony bones in the road, testifying those accidents. Among a thick fog and a light snow we could set our tents. It was freezing, to the point that one the ponies wanted to go inside the tent. The next day, the blue and luminous sky reigned. With the snow up to the knees we advanced downhill. From a distance we could recognize the first farms and after 14 days we reached the road to Nikka Chu at almost 3000 m. high. Then the rest of the way to Ponakh we continue in 4 × 4 to the capital Thimpu, which does not have a single traffic light.

To finish, we were expected a surprise. We enjoyed a sybarite night with plenty of music. A whole group of musicians danced and played for us.

A curious cyclist peeked through the fence and was happy with us. Thinley, our guide, invited him to come in and participate, but after thanking he preferred to continue on his way. So the father of the king, followed by two bodyguards on mountain bikes, left our beautiful farewell party.